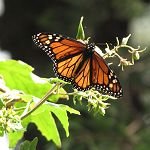 The monarch butterfly is a conservation icon. Environmental groups warn of increasing threats to the charismatic butterflies; an influential 2013 report documented populations at a 20-year low. But earlier studies showed no decline in monarch populations. The researchers will resolve these contradictory findings, verify the trend of monarch populations, and then conduct extensive interviews to tackle some broader questions: How do scientists, NGOs, and other conservation actors respond to scientific ambiguity? And how do contradictory findings about icons like the monarch shape public, organizational, and scientific messages about environmental change?