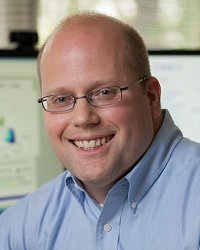 Patrick Reed is the Joseph C. Ford Professor in Engineering in the College of Engineering. He serves on the Faculty Advisory Board of the Cornell Atkinson Center for Sustainability. Reed’s primary research interests relate to sustainable water management given conflicting demands from renewable energy systems, ecosystem services, expanding populations, and climate change. Dr. Reed received his Bachelors of Science in Geological Engineering from the University of Missouri at Rolla in 1997. He then continued his graduate studies at the University of Illinois at Urbana-Champaign.

After graduating with his PhD from Illinois in 2002, Dr. Reed was on the faculty in the Department of Civil and Environmental Engineering at the Pennsylvania State University (Penn State) from 2002-2013. During his time at Penn State, he received the U.S. National Science Foundation’s Career award in 2007. In 2008, Dr. Reed was a visiting scholar in the School of Engineering, Computing, and Mathematics at the University of Exeter in the United Kingdom and also received the ASCE/EWRI Outstanding Achievement Award. Dr. Reed joined Cornell University as a Professor of Civil and Environmental Engineering in 2013.