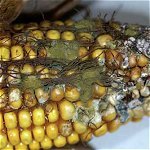 Mycotoxins – toxic compounds produced by fungi – contaminate an estimated quarter of the world’s food supply. Chronic exposure to one of the most potent mycotoxins, aflatoxin, has recently been shown to suppress the immune system and stunt growth. Cornell researchers will examine aflatoxins in maize in East Africa, with an initial emphasis on low-resource maize-growing farm households. The ultimate objective is to identify the most effective and feasible interventions to reduce aflatoxin exposure for high-risk populations. The team will also conduct a pilot project to begin to quantify the relative impact of agronomic, environmental, and behavioral factors on aflatoxin accumulation in maize and exposure in humans.