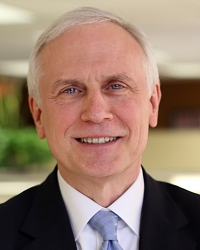 Bruce Bailey is a former Senior Advisor and Program Manager for Smart Buildings at UL (Underwriters Laboratories), where he has also served as the VP of Renewables within the Energy and Power Technologies division. In 2016, UL acquired Bruce’s firm—AWS Truepower, LLC—which he founded in the early 1980s. AWS was a global technical and engineering services consultancy that worked for large windfarm and solar project developers, utilities, government agencies, and the investment community. Offices were established on 4 continents. Bruce retired from UL at the end of 2019.

Bruce graduated from Cornell in 1974 with a B.S. degree in Meteorology. As a student, he served on the University Student Senate and as the president of Alpha Zeta fraternity. Since graduation, he has returned to campus on several occasions, giving lectures and serving on the Earth and Atmospheric Sciences Advisory Council, which he now chairs. His former firm hosted several Cornell students for work internships.

After leaving Cornell he joined the Atmospheric Sciences Research Center at SUNY Albany where he attained tenure and worked in various applied research roles for 11 years. This was where he developed a passion for renewable energy and its multi-disciplinary nature. While at SUNY Albany, he also worked for 4 years as a weekend TV meteorological at the local ABC affiliate (WTEN).  After starting AWS, he earned a doctorate in Engineering Management. He is also certified as a Consulting Meteorologist by the American Meteorological Society.

Bruce has chaired several industry conferences, served on industry association boards and on a school board, and been a US Department of Energy program reviewer. He has authored numerous publications and contributed to two books. He supports clean water programs in underdeveloped countries and the adoption of smart technologies in cities and buildings to achieve sustainability, resilience, and economic goals. He is a life-long tennis player and enjoys golf and reading fiction.