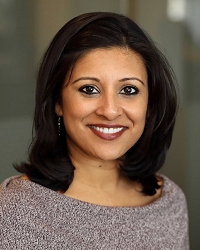 Fatema Z. Sumar is the Executive Director of the Center for International Development at Harvard University. She has a distinguished career as a practitioner in the US government and civil society.

Fatema most recently served as a presidential appointee as the Vice President of Compact Operations at the US Millennium Challenge Corporation (MCC). In this role, she oversaw the agency’s compacts to reduce poverty through economic growth globally. She managed MCC’s technical and regional divisions working on infrastructure, the environment and climate change, the private sector, gender and social inclusion, human and community development, land and agriculture, procurement, financial management, strategic partnerships, and contracts and grant management. She was previously MCC’s Deputy Vice President for Europe, Asia, the Pacific, and Latin America.

Fatema also served as the Deputy Assistant Secretary for South and Central Asia at the US Department of State where she led efforts to expand regional economic and energy connectivity and as a Presidential Management Fellow (PMF). In the US Congress, she worked for three Senators including as a Senior Professional Staff Member on the Senate Foreign Relations Committee focused on Afghanistan, Pakistan, and the broader region.

In civil society, Fatema was the Vice President of Global Programs at Oxfam America where she oversaw regional development and humanitarian response to fight the injustice of poverty. Early in her career, she also worked at the American Civil Liberties Union.

Fatema is the author of the book, The Development Diplomat: Working Across Borders, Boardrooms, and Bureaucracies to End Poverty. She sits on Advisory Boards for Princeton, Cornell, and Indiana universities and on the Advisory Council for Muslim Americans in Public Service. She has been published in the Stanford Social Innovation Review, The New Republic, The Hill, and other outlets. She is a frequent guest speaker and has testified before the US House of Representatives and US Senate.

Fatema graduated with a Master of Public Affairs from Princeton University’s School of Public and International Affairs, where she received the prestigious Stokes Award, and a Bachelor of Arts in Government from Cornell University. She studied abroad at the American University in Cairo. She has an honorary doctorate from the Middlebury Institute of International Studies at Monterey.