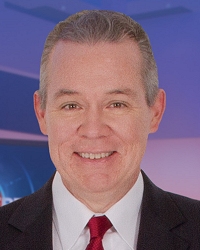 John R. Toohey (aka John Morales) is Chief Meteorologist at WTVJ-TV NBC-6 in Miami FL. He is also founder and president of ClimaData Corporation, a commercial weather firm providing specialized forecasts and meteorological consulting for government, industry and media. His 35-year career includes civil service, as a forecaster for NOAA’s National Weather Service, as well as decades of experience as a Certified Consulting and Certified Broadcast Meteorologist. He’s also been an adjunct professor of meteorology.

John attained his undergraduate degree in Atmospheric Sciences from Cornell University in 1984. He is currently a candidate for a master’s degree in Environmental Science and Policy at Johns Hopkins University (to be completed in 2020). John is also an aviator with 1500 hours as a private pilot with multiengine and instrument ratings.

Mr. Toohey has won numerous awards, including four Emmy awards for his TV presentations. He was inducted into the National Academy of Television Arts and Sciences Silver Circle for 25 years of distinguished work in broadcasting. He is a Fellow of the American Meteorological Society (AMS) and garnered the AMS Award for Outstanding Contributions to the Advance of Applied Meteorology.

John is also a member of non-profit boards in South Florida – the Open Door Health Center which serves the uninsured poor, and the CLEO Institute which empowers communities to act on climate and champion solutions for a resilient future.