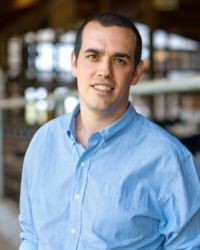 Dr. Joseph W. McFadden is an associate professor of Dairy Cattle Biology and the Northeast Agribusiness and Feed Alliance faculty fellow in dairy cattle biology in the Department of Animal Science at Cornell University. McFadden is the recipient of the 2019 Cargill Animal Nutrition Young Scientist Award and the 2018 American Dairy Science Association Northeastern Branch Young Research Scientist Award. He received his BS with Distinction in Research from Cornell University in 2003, his MS from the University of Illinois at Urbana-Champaign in 2005, and his Ph.D. from Virginia Tech in 2009. For three years, he completed a postdoctoral fellowship in the Department of Neuroscience and Center for Obesity and Metabolism Research at Johns Hopkins Medicine. In 2012, he joined the faculty at West Virginia University as an assistant professor of biochemistry. In 2017, McFadden moved to Cornell University. His research interests center on the study of lipid nutrition and metabolism in dairy cattle. First, he is internationally recognized for defining the bovine lipidome, sphingolipid biology, and the role of ceramide in the dairy cow. His on-going interest is to define the ability of ceramide to modulate insulin signaling and nutrient partitioning during lactation. Second, his lab is taking alternative approaches to define methyl donor metabolism in transition cows. Specifically, McFadden is working to identify fatty acid feeding regimens that optimize the ability of methyl donor supplementation to enhance hepatic triglyceride disposal in transition cows. Third, he has studied the effects of nutritional emulsifiers on fatty acid digestibility and health in cows. Within this same body of work, he is defining the digestibility of saturated and polyunsaturated very-long-chain fatty acids. Further demonstrating his versatility as an animal scientist, McFadden is also characterizing the mechanisms that explain poor heat stress resilience in lactating dairy cattle. He is investigating the interactions between the gut microbiome, intestinal health, endotoxemia, immunity, and hepatic function in heat-stressed dairy cows. In parallel, McFadden is working with industry to develop the next generation of nutritional therapies to improve growth and milk production efficiency in cows exposed to extreme heat. As principal investigator, McFadden has secured over $4 million in funding to support these research initiatives. This includes three USDA NIFA AFRI Foundational Program awards and a Foundation for Food and Agriculture Research Seeding Solutions award. Additionally, McFadden has authored 33 peer-reviewed papers, 81 abstracts, 7 extension papers, and presented 35 invited domestic and international talks. He has also served as a primary mentor for 11 graduate student programs, 1 postdoc, 4 visiting scholars, and advised over 45 undergraduate researchers. He also teaches Nutritional Physiology and Biochemistry at Cornell.